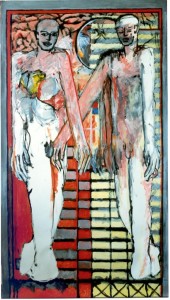 Important themes in François Marée’s work are “vulnerability” and “emotional pain”. These themes have an intimate relationship with his continual search for that which gives consolation and comfort. Is this a search for other people or for a greater spiritual goal?

One specific spiritual event in his past has always played an important role in his work. When he was a student he visited the Bildungs- und Begegnungsstätte van Karlfried von Dürckheim. During this visit he was able to lay his existential pain at the feet of the symbol that has carried that pain for 2000 years in Western culture: Emmanuel. This experience helped François accept his own existence. His development is, in part, dependent on the moral boundaries that every culture places on every individual. In order to move forward as a human being, he had to test moral norms time and time again, and move those boundaries back Painting and embroidery gave him the space to do this.

François studied at art school from 1983 to 1985. This gave him the opportunity to experiment with form and colours and emotions such as rage, melancholy, alienation, aggression and pain.

“The fights with my feelings and thoughts at that time focussed on whether I was a man or a woman”, says François now. “Am I allowed to be a beautiful woman in a gorgeous male body? Not as mutilation, but actually as an experience of beauty?”

The answers still lies locked in his paintings and embroideries. For example, he paints androgynous figures that keep their (male?) power while they cultivate (female?) elegant gestures. Or men that, during their quest for physical sexual pleasure, are unable to hide their vulnerable desires for existential support and comfort.

The embroidery of François is another search for androgyny. In his needlework François has personalized in a special dimension his longing for serenity.